The seven-segment decoder is used in many applications. This can be used in displaying letters or numbers. It is most commonly used in digital clock displays, clock timers, and others. Using this has some advantages. For example, with a seven-segment decoder display, it is easier to read the time in a digital clock than with an analog one. It can be easily read because it easily catches the eye.

The group has chosen to create the digital project, Countdown Timer, in order to show one of the applications of the seven-segment decoder. This is only one of the many useful things that can be created with this component. Countdown timers can be started and then stopped at any time and then the display will be showing how much time had passed in between. This timer can be used in different activities. It can be used in sports, games, and in other areas.

We will be showing in the following pages the circuit schematic diagram, what components are to be used, and how the circuit operates. 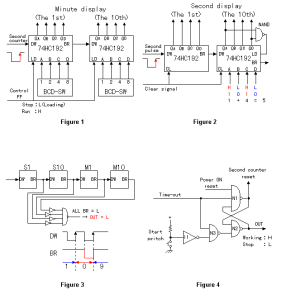 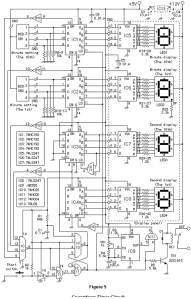 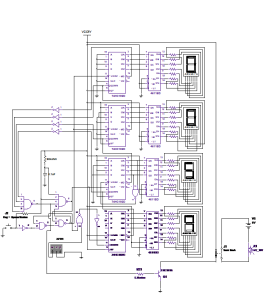 In the configuration of the minute counter (Figure 1), the 74HC192 (Presettable Synchronous Up/Down BCD Counter) is used as the counter. There is 74HC190 in the counter which can be down in the count which is used as the clear terminal as the second counter. The pulse signal (being the once per minute) from the second counter is inputted to DW (Count Down). The counter is count-downed by the low to high transition of the signal. The output of the BR (Borrow) becomes the L (the low level: 0V) when the counter becomes 0. Next, it changes into H (the high level: +5V) when the counter becomes 9. The counter of the upper places is count-downed by the change of such BR.

Lastly, the start/stop control circuit (Figure 4) operation uses the SR-type flip-flop (FF) which uses the NAND gate as the circuit which controls the operation (start/stop) of the timer. N1 is for the stop and N2 is for the start.

The countdown circuit cannot be stopped unless it is turned off at the power supply or main switch.

The circuit can only be preset by manipulating the 74HC192 pre-settable synchronous counter because the BCD coder is not available in the MultiSim 01.

This entry was posted in Education, Tech.

Please help me in making this countdown timer …. i have selected this as my project …i really want any article or mateial and your project report ..please help me its a huge request .

Hey Aiman did you complete your project? If yes then please help me through i am new and i have this as my assignment